The following letter was sent to George Pell back in May. There has been no reply – not even an acknowledgement of receipt.

This is hardly surprising, as many previous communications have met the same fate, or at best elicited a perfunctory response that made no attempt to address the issues raised. The community’s attempts at dialogue with the hierarchy have failed miserably, least of all through want of trying.

Rather than explore these serious issues, Pell has chosen to demonise the community – there are numerous cases (press reports and letters) documented on this website. The most recent is … Continue reading →

Griffo and friends, what a beautiful work of art you have made in St Vincent’s (“A break-in immaculately conceived”, July 31). What a shame that nowhere in the article was that recognised by Father Prindiville. He was quoted as being more concerned with the congregation’s failure to “accept any sort of authority” than with the beauty of the words, art and artists in St Vincent’s. Perhaps he should try walking with the people as Christ did (and clearly Father Ted, too) rather than on them. Continue reading →

On October 1, 2006 the National Aboriginal and Torres Strait Islander Catholic Council (NATSICC) will celebrate the 20th Anniversary of Pope John Paul ll’s visit to Alice Springs and his address to the Aboriginal People. The Message Stick Pass it On relay was launched nationally by none other than Cardinal Pell on 1 May 2005.

The Message Stick is a call from the Church to come together united in friendship, fellowship, spirituality and respect, to commemorate this anniversary and recommit to the message of the late Pope. 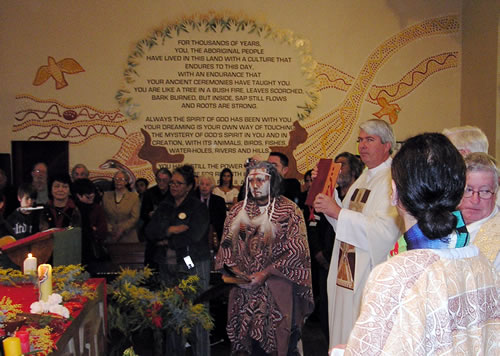 On Sunday the Message Stick was welcomed at … Continue reading →

Graffiti in its glory…Father Frank Brennan, centre, at yesterday’s ceremony, with the surprise mural behind him. At far left is Marnie Kennedy, the sister of the late Father Ted Kennedy.

IT WAS a big day at St Vincent’s Redfern yesterday, but Father Gerry Prindiville sat grim-faced through the celebrations.

He had come to Mass to find a huge mural had appeared overnight on the east wall of his church. As far as the embattled priest was concerned, this was not a miracle … Continue reading →

The congregation spontaneously applauded at the end of John Hill’s reflection on last Sunday’s readings. It was inspired by National Sorry Day, the annual commemoration (on May 26) of the tens of thousands of Indigenous people who were forcibly removed from their families as children.

As recently as last week Benedict XVI urged the Australian Government to seek forgiveness from Indigenous Australians: “I encourage you and the Government to continue to address with compassion and determination the deep underlying causes of their plight,” the Pope said. “Commitment to truth opens the way to lasting reconciliation through the healing … Continue reading →

This week is Sorry Week.
It is an acknowledgement to our Aboriginal brothers and sisters of the misery we have inflicted upon them. We ask for forgiveness. We have so much to be forgiven for. That doesn’t mean that we beat our breasts, wear hair shirts or get into the way of flagellation. Rather we look deep into ourselves as individuals and as a community and see what amends we can make. We … Continue reading → 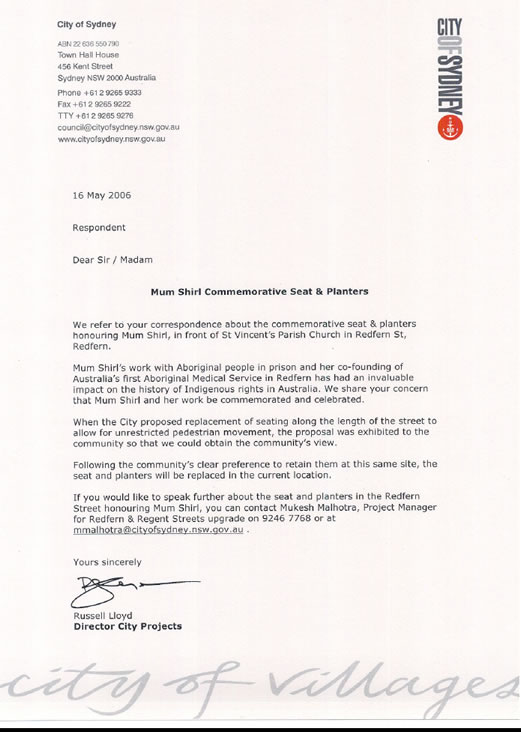