It was good to see your letter acknowledge that OUR Parish “has particular characteristics, with its indigenous population and the significant heritage of Fr. Ted Kennedy’s work”. We note with interest and pleasure that this is the first time you have made such an acknowledgement.

We would like to acknowledge your request for cooperation and harmony, and your expression of an earnest desire to fulfil your role in the parish as you see fit.

Cardinal Pell says he is willing to go to Redfern to sort out the problem, but months of negotiations have gotten nowhere. “The parish clergy continue to have my full support,” he said. “They have been subject to regular abuse, harassment and provocation, often during the mass itself.” The Australian, August 05, 2006

Over the last 30 months or so, members of the St Vincent’s community, as a group and individually, have been trying to establish a dialogue with the hierarchy of the Catholic Church regarding the untenable appointment of proponents of the Neocatechumenal Way to the Redfern parish, and … Continue reading →

From this week’s Online Catholics:

Following Paula McLeod’s article last week, Rise Up for a Just Church, several comments were made to me which have been encapsulated in this week’s letter, Some help please! from Fr Sanchez, of Brisbane: basically that people would like to write – but to whom and what needs to be said?

In the specific case of Redfern, Cardinal George Pell, and the parish priest, Fr Gerard Prindiville, would head the list. Other possibilities include Archbishop Philip Wilson (Adelaide), as President of the Australian Catholic Bishops’ Conference, … Continue reading →

The 10am Mass on Sunday at St Vincent’s was stacked with many more Neocats than usual, including a significant proportion of first-timers. They were almost strategically distributed about the church, surrounding the community, to hear Prindiville read this letter to the congregation before Mass on Sunday. It was also published in the weekend’s parish bulletin.

From the Parish Priest
Dear brothers and sisters, and people of good will,
Our parish of St. Vincent has recently been in the news. For this reason Fr Clesio and I wish to appeal to you for cooperation.

Who really gives a fig about Redfern? If it were East Timor or West Papua the letters would be flying in all directions!

My mail this week revealed the usual clutch of bills and brochures, but the letter that caught my attention was an envelope with “Rise Up for a Just Church” emblazoned across the front.

The contents revealed the latest letter from the American lay activist movement Call to Action, celebrating its 30th year in 2006. Interesting I thought: 30 years of advocacy for the accountability of bishops. Thirty years … Continue reading →

The following curious article appeared in The Australian today.

It should be noted that the good Cardinal was not criticised so much for his opinions on how to help the Aboriginal community, as for the implication by association in those words that the St. Vincent’s community is involved in such activities.

It should also be noted that yesterday was Hiroshima Sunday, so the liturgy included a number of uncomfortable (leftwing?) reminders of the past – such as the sad fact that the atomic weapons dropped on Japan were blessed by Catholic priests before they were deployed, and that the small … Continue reading →

My name is Frank Cain and I have been a member of this community for around twenty years. I am proud to have played a part in the liturgy of the Message Stick and establishing the Mural at St Vincent’s last Sunday. 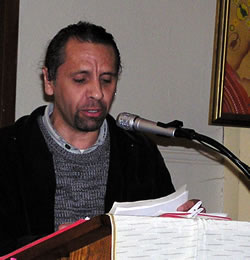 The Mural is a symbolic artistic gesture of the discernment of God’s beautiful face in creation. It conveys the words of the Vicar of Christ, or Christ’s representative, the late Pope John Paul II, stating that the Aboriginal people make up part of the Church of this country and recognizes their Catholicism as well as … Continue reading →

Help now or in the hereafter? Different approaches by modern missionaries have stirred tensions in Redfern, writes Peter Lalor 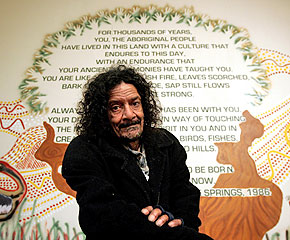 LAST Saturday night, a group of conservative Spanish missionary priests held their mass in a middle-class Redfern terrace. The Eucharistic loaf was baked according to a strict recipe and the furtive community prayed like early Christians.

Nearby, at their empty Catholic church, a confronting mural was drying on the walls. … Continue reading →